This is a real adventure of a tour. Taking you to some amazing spots to witness the magic of Iceland. We visit the Rift Valley of Thingvellir, the erupting geyser at Geysir Hot Spring Area, the majestic waterfalls of Gullfoss, Skógarfoss and Seljalandsfoss. We drive along the foothills of Eyjafjallajökull volcano passing the ice flows of Mýrdalsjökull glacier and through the black volcanic sands of the south coast to Vík. Included in the tour is also a visit to a natural ice cave in the great glacier, access to geothermal spas in the hotels and a sightseeing tour of Reykjavik, as well as a chance to splash in healing waters of the Blue Lagoon and the possibility of seeing the Northern Lights.

Your guide will meet you in the lobby of the hotel at 08:45 and bring you out on The Golden Circle Tour which is the most popular day tour in Iceland and for a good reason. First, we travel inland to the National Park and Rift Valley of Thingvellir where the edges of the Eurasian and the North American tectonic plates can be clearly seen and the first viking settlers established their parliament or High Council in 930 AD. We then go further inland to visit the Geysir Hot Spring Area, a large geothermal field featuring Strokkur which is Europe´s only erupting geyser. A short drive from there is the breath taking Gullfoss waterfall, Iceland´s largest two-stepped waterfall situated in a glacial river, flowing from the massive glacierLangjökull. We then head to Hotel Selfoss which is actually built on the bank of the same river a bit further downstream not far from the southern coastline.At the hotel there will be a short movie shown about the northern lights and welcome drink offered at the bar. The hotel is located in a great area for witnessing the northern lights given the right conditions and aurora activity level.

Today we do the South Shore Adventure. Driving east along the south coast towards the legendary volcano Eyjafjallajökull (last eruption 2010) in whose foothills aret he captivating waterfalls of Seljalandsfoss and Skógarfoss. Then on through the black volcanic sands created by volcanic activity and flooding fromMýrdalsjökull glacier, all the way to Vík where we stop close to the beach with a view of the basalt columns rising from the ocean. In Vík you will be picked up by a Super Truck that takes you all the way to the magnificent Katla Ice Cave where you get a once in a lifetime chance to experience the inside of an actual glacier. We then head back to Hotel Selfoss with its Riverside Resturant and a lovely spa to which you have a free entrance. Also, another night to keep your eyes in the sky.

Today we drive through the great lava fields of the Reykjanes Peninsula to visit the world famous Blue Lagoon to soak in its silica rich healing waters with the possibility (some say) of washing away all your sins and looking ten years younger in the process. Afterwards we head to Reykjavik for a City Tour checking out landmarks of this northernmost capital in the world and ending up in the afternoon again at Grand Hotel Reykjavik.

Those that go home on this day will have to book individual private transfers (see optional add-ons). Those that would like to stay longer can book extra nights with us.

·       Short film presenting the Northern Lights as well as entrance to the hotel spa on the second or third day.

·       Evening hunt for the Northern Lights while staying in Selfoss (weather dependent). 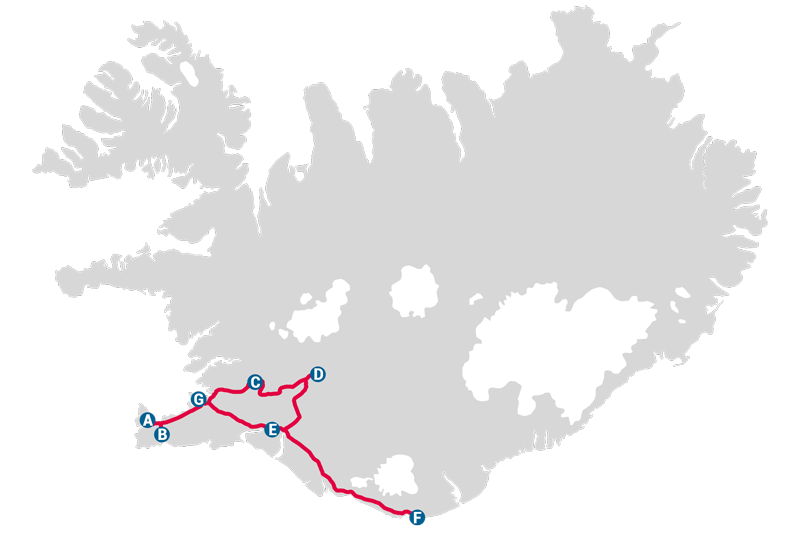 
Are you a Travel Agent?
Send us a message for quotation and commission.

Are you an individual traveler?
Please visit our
Travel Reykjavík Portal